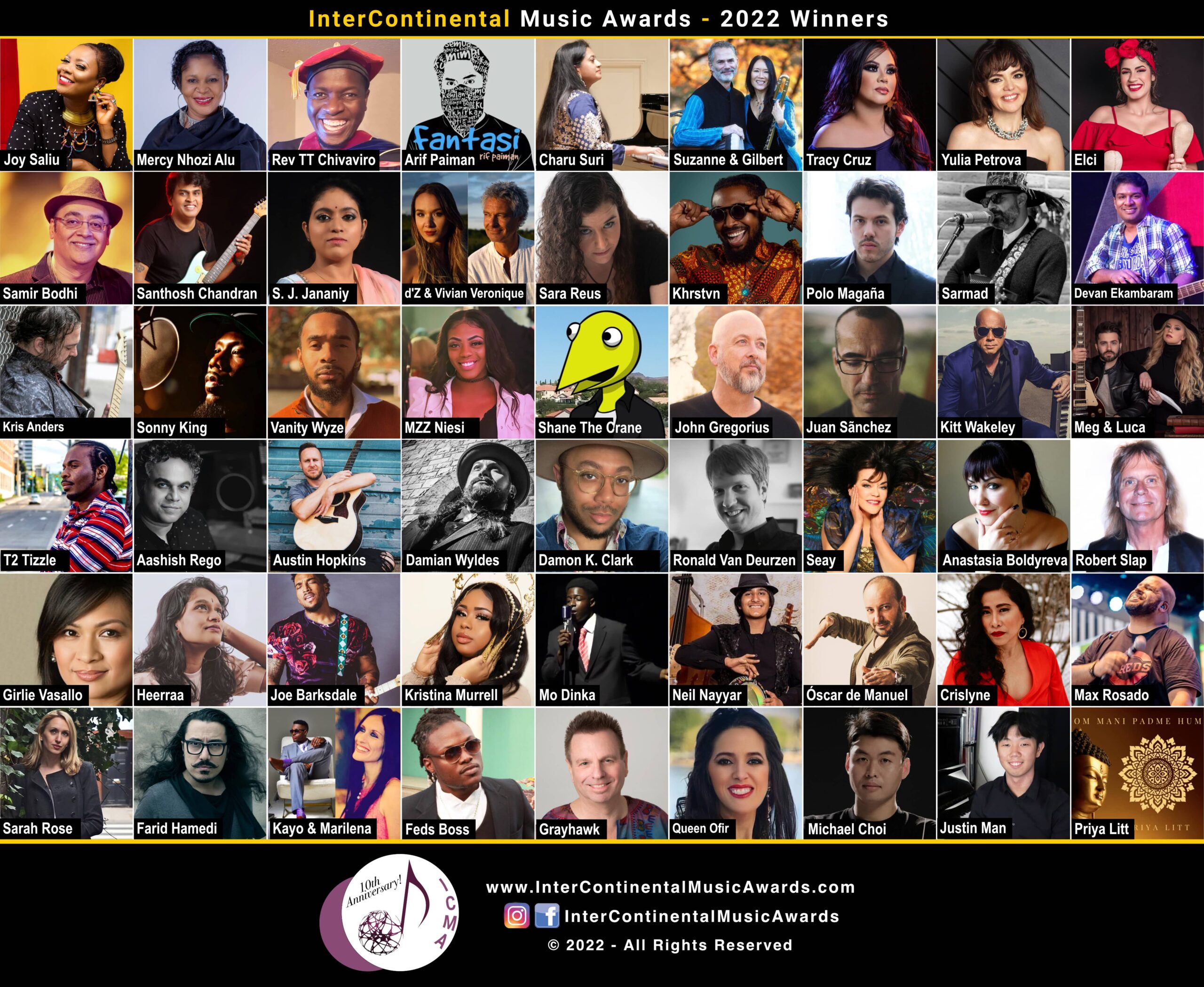 Los Angeles (August 5, 2022) – Musical artists and their fans all around the world gathered online last Sunday for the 10th Annual InterContinental Music Awards, a Los Angeles-based music competition that recognizes musical talent worldwide in 145 genres, from 35 countries, across 7 continents. The mission of the InterContinental Music Awards (aka the “ICMAs”) is to foster peace and unity through the universal language of music, recognizing global talent and helping artists to bolster their careers.  A complete list of the ICMA Winners for 2022 (54 in all) is shared below, and the competition’s 161 Finalists can be found here, along with their nominated songs, genres and images.

The ICMAs were presented live on Zoom by ICMA Founder and Executive Director Shahed Mohseni and actress/author Karen Lorre, and each Winner was invited to make a live acceptance speech. For many, it presented a unique opportunity to gain beneficial recognition – and media footage – on an international level. The options for entry are categorized by geographical continent or region, and then by musical genre.  The song submissions are evaluated by an independent panel of judges including artists, ethnomusicologists, producers and executives working in the Hollywood music, entertainment, film and media industries. Songs are judged equally on originality, melody, harmony, composition and quality of the production.

Heerraa, a dynamic young independent artist from Malaysia, was the recipient of the organization’s new ICon Award, an award level added this year in honor of the 10th Anniversary celebration. The ICon Award — akin to “Best in Show” – is chosen by the Jury Panel from amongst the pool of all Continental Winners. In addition to winning with her Pop song entry “Feel Alive”, Heerraa is a Harvard University sophomore, and co-founder/advisor of Ascendance, an international youth movement.  The ICon comes with a $1,000 Cash Award was sponsored and presented live on air by Hilton Entertainment LLC, a Los Angeles-based communications firm.

Mr. Mohseni began the live concerts over a decade ago to unite international students in Cyprus where he attended Eastern Mediterranean University. He eventually moved to Los Angeles to pursue a Music Business education, while expanding the awards and pivoting to producing online events during the pandemic. He explained, “Our goal is to evaluate music differently from the standard awards show categories, using a more global and ethnical perspective. Our continental approach offers musicians around the world a chance to be seen and rewarded for their artistic efforts regardless of their location, gender, ethnicity, nationality, color or race. We accept & celebrate music from all seven continents; it really means a lot to me to welcome artists in regions or countries that restrict music freedom.”

ICMA Winners receive career-enhancing prizes, including a scholarship into the DIY Music School, one-on-one coaching, mentoring from members of the judging panel, a Star Spot feature, a chance to perform in future InterContinental Concerts, discounts on software, and an official ICMA award certificate.  Prizing varies year-to-year based on sponsorships; brand partnership decks are now available for the 2023 Awards.

Interested musicians, producers, performers and songwriters can enter the 2023 InterContinental Music Awards, which will begin accepting online submissions for an “early bird” rate on September 1, 2022, via a link on the organization’s official website.

A full replay of the 2022 InterContinental Music Awards will be available to watch on YouTube within the coming weeks; subscribe to the organization’s official Youtube channel to receive notifications: https://www.youtube.com/channel/UCF-UFLhezZfdtUzg2zHhVjg/videos

For more information, please contact Beth Hilton of The B Company via bethhilton@thebcompany.com/ Interview requests are welcome for the ICMA Founder and Executive Director Shahed Mohseni, Judging Panel Members, and any of the 2022 Winners of the ICMAs.

About the InterContinental Music Awards

Founded in 2011 by Shahed Mohseni, InterContinental Music Awards is committed to upholding music diversity and promoting unity among all people on earth. The awards program is open to musicians worldwide, who compete with their peers in geographic regions and in over 145 music genres. To-date, ICMA has recognized more than 274 talented musicians in 38 countries. Winners benefit from the educational and promotional opportunities that ICMA provides, enabling them to advance their music careers. https://www.intercontinentalmusicawards.com/music-competition/

(Listed by Continent, with Song, Artist, Country of origin, and genre)

“How To Love a Girl” by Sarah Rose – United Kingdom (Country)

“I See the Light” by Aashish Rego – India (Funk)

“Across the Ocean” by Michael Choi – India (Soundtrack)

“A Walk Through Brindavan” by Devan Ekambaram – India (World Music)