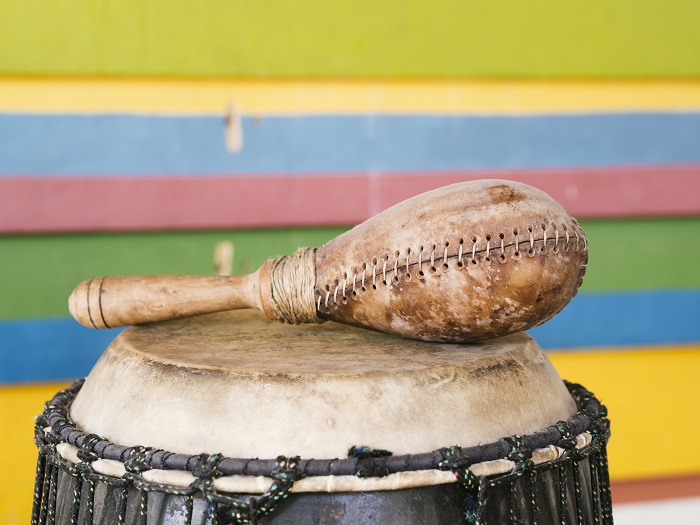 The variety of music in Africa is as diverse as the ethnicity in which it resides. But the intricate rhythms and percussion sounds and many different types of harmonious bands are characteristic of most types of music in the culture of these lands. Vocal music is mostly performed by the singer and the band that responds to his voice. Certainly, different African cultures have been influenced by one another. For example, music styles in some parts of central sub-Saharan Africa, such as Ghana and northern Nigeria, are influenced by Arab culture.

Music has literally infiltrated all aspects of African life. Music for fun, dance, performance, religious rituals and rituals as well as events related to birth, puberty, marriage and death. Healers use special songs and dances to treat patients, and there are songs to accompany tasks such as drilling, grinding, woodworking and harvesting. When arguing in court, songs are sung to praise leaders, criticize officials, narrate and tell anecdotes of history, various types of songs are used. Countless songs are made for special occasions.

Music is a staple of many African customs. Among the Basongye tribes in Zaire, a prominent musician at a funeral had to announce his death. Some musicians and singers also play the role of a clown, providing the entertainers with the joys they need to soothe their emotions.

Dance and languages in African music

African music has always been associated with dance, and music and dance are both central pillars of many African customs, occasions and celebrations. Dancers often sing or dance to an idiophone instrument they hold or hold on to.

Many African languages are “audio languages”, the languages in which the meaning of the word is determined by the particular modulation given by the speaker. A given word may have four different meanings with different modalities given to it. Audio language makes it possible to use music to communicate. Drums, horn players and other musicians mimic the words and tell the story by imitating the rhythms and oscillations of the words. “Speaker drums” – with the ability to modulate two or more different modes – are often used for messaging. African musicians can even tell a story with a drummer.

In Africa, music is a social activity where more or less everyone is involved. Thus, music is usually played outside the home and people actually make and play music spontaneously.

African music, like folk culture and its history, is a tradition transmitted verbatim and written culture in sub-Saharan Africa is not so important and therefore there is no ethnography.

African songwriters employ a wide range of vocal sounds, and even in the performance of a single piece, the sound quality can be switched from bass to bass. The singer sometimes whispers, shouts, screams or imitates animals. A distinctive feature of African music is its over-the-top style of performance, called ava and response, in which the singing vocals are repeatedly answered by the band mates. When the singing resumes before the response of the singing spouses ends, the vocal sounds are thrillingly intertwined. Other features of vocal music are short phrases that are repeated each time with a different word.
Genuine music in Africa has been a very rich source of information that has been drastically reduced in recent years. Instead of creating new ideas, African artists chose to imitate American and European musicians and, like many other artists, were financially successful. This, of course, has contributed to the development of African music to some extent, and has been able to produce some interesting fusion.

As many around the world believe that original music should be distinct from modern music, this is not the case in Africa.

In the following we are going to get a lot of African music about him and get to know him. Browse the different styles of African music and if you’re interested, I’ll introduce some of the most popular African songs.

Given that there are so many African styles of music, here are some of the most popular and special:

Sucus is almost a style similar to Rumba. Renowned African singer Franco Lambo is one of the most celebrated artists in the genre; and has been practicing it for nearly five years. Due to the use of special rhythms, he is also called the guitar wizard.

Sucus music is originally for the Congo country and has some similarities to the Rumba style. Papa Wemba was another prominent musician of this genre who died in the 6th year. If you want to hear a famous song in this genre, be sure to listen to Papa Wemba’s Yolele.

This style was originally for the Nigerian country, and much of it was used in Western music. Subcategories like afrobeat and highlife find the same style of publishing.

Les Amazones d’Afrique, a group of women in this genre, have furthered their music content towards equality and equality with men. Its members include Benin, Mali, Nigeria and Guinea. The charm of this group is the variety of styles that are covered. I suggest you listen to Mansa Soyari’s song from this band.

A popular Senegalese style! Youssou N’Dour formed the band Super Etoiles for the first time in 6 years, becoming the most popular band in the genre.

We may also find this helpful:
Japanese music culture

Zilyn is a very beautiful style with more focus on vocal and vocal techniques. Its roots are in Benin, and religion has had a profound effect on this style. African pop queen Angelique Kidjo uses many of Zilain’s techniques in her music and is often criticized for failing to maintain the authenticity of African music.

But the interesting thing about him was his extraordinary influence on African music. Kijo currently lives in New York, but says he occasionally returns to his home village of Avida to foster his spirituality. To get acquainted with this genre, I recommend Angolo’s song from this artist.

This style, also known as Ethno-Pop and Gnawi Blues, originates from the desert. This style is based on North African music and religious songs.

In terms of style of poetry and dance, the music retains its originality. When the siege of Timbuktu in Morocco in the 9th century and the language of Bambara became popular in the area, the emergence of this music began almost.

Also, the reason for using the Sintire or Gamber instrument in this style is for the above reasons. In Morocco, the style is also considered to be relatively popular music, and in the country’s cafes and music shops, many artists find it.

Today, the progress of music in Africa has been so great that it four african music was nominated for Grammy music Awards 2019 in the Best World Music Album category. The nominees include the Soweto Gospel Choir (South Africa), Seun Kuti & Egypt 80 (Nigeria), Fatoumata Diawara (Mali) and Bombino (Niger). Among the nominees for the Grammy Award- “Soweto Gospel Choir” from South Africa Won the award for the album “Freedom”